In sitting down for a formal chat with my old friend and collaborator, Alissar Chidiac, I had one critical question in mind. How, despite four decades of obstacles—chief among them a global pandemic with incessant shutdowns in cultural sectors—is she still involved with the arts?

Inside her tiny Parramatta apartment, I spoke with Alissar as she sipped Arabica coffee in her coffee pot ركوة القهوة. We’ve shared three decades of friendship, meeting in 1991 when Alissar debuted The Moon Gate القمرية performance, the first theatrical work from TAQA Theatre مسرح الطاقة, the Arab-Australian contemporary performance company she co-founded.

Our last project together was co-creating, alongside Maissa Alameddine, the Arab Theatre Studio ستوديو المسرح العربي in 2014. That year, as part of the Close Encounters event, we produced an evening of short works called Remote. Control, in conjunction with Urban Theatre Projects (UTP), Bankstown Art Centre and Bankstown Youth Development Service.

Now, seven years later, as we drink  أرتشف coffee, I ask Alissar: “You’ve been working for 40 years and still have the energy to continue. Why do you keep going?”

“How and why I keep going is about identity,” Alissar says. “It’s about a deep-seated sense of wanting social, cultural, and political change, to improve quality of life and work towards justice.

“Old-style political activists might not consider cultural action makes change,” she adds. “I think (that is) the essence of why we keep going—that there’s always a vision. I’m not talking about jobs; I’m not talking about income. There is always a vision, hopefully, of creating new ground, breaking new ground, and, at the same time, a strong sense of starting again.”

Having been involved in community theatre for over 40 years, Alissar views its practice from multiple sides: as performer, writer, producer, director, and workshop facilitator. Unfortunately, in 2021, community theatre finds itself in somewhat of a crisis with a lack of funding, limited rehearsal and performance spaces, the effects of the digital era and a steep decline in group numbers.

But Alissar believes what is defined as ‘theatre’ changes every few generations.

“Some people of our generation will hold theatre to its formal and orthodox kind of definition. But, for me, the meaning of a word changes by how you activate it or inhabit it, how you embody it,” she says.

“Theatrical performance, for a couple of generations now, has been multimedia. And multimedia is still driven by people, in that we now have more than our bodies and voices to tell stories.”

I suggest many artists our age tend to resist change, although we know deep down inside it’s inevitable. These artists consciously decide to act the same way and are afraid to move out of their comfort zones.

“I’m not going to say theatre or performance have diminished, though some forms have shifted,” Alissar points out. “I mean, in the 1980s and 1990s, there was a constant, boring argument about community theatre or art versus real theatre or art.”

Over the years, Alissar’s activism shifted from protesting and marching on the street to effectively transferring her advocacy into community and cultural engagement. This championing includes partnerships with state and cultural institutions so communities benefit from and use those resources to create high-quality work. Successful examples include Tfouh!  تفه” and the Powerhouse Museum exhibit, Wattan وطن.

She explains Tfouh! is like spitting at someone in Arabic, and the exhibition was born from her visceral, artistic response to the 2006 Lebanon War.

“Sometimes, when you’re gutted and broken-hearted, you find strength in gathering, creating, and speaking out. At that time, I worked with (arts and cultural development worker) Mouna Zaylah, and together, we coordinated and called out for artists to do work. It wasn’t curated; anybody who wanted to offer work was accepted.”

Alissar continues, “Forty-five Arab-Australian artists created work in a concise space of time that was loud and angry and defiant and resistant, taking over not only the inside of [the former Mori Gallery in Darling Harbour] but also outside,” she recalls.

One display outside the gallery included artists stacking hundreds and hundreds of body bags in streets across Sydney’s CBD, “not only to attract public or media attention (but) also as an expression of grief and solidarity,” Alissar says.

Alissar views her other major, long-running project Wattan (1998-2004), as a different kind of activism. Here she stepped into a new, unexplored partnership with a state cultural institution like the Powerhouse Museum. Until Wattan, there was very little documentation or representation of Arab-Australian communities, their histories and their heritage.

“It was a vision of working with the community and cultural heritage and redefining what we mean by this, operating within the establishment and using their resources. They are public institutions—our taxes pay for those institutions,” Alissar argues.

She adds, “Most citizens that pay those taxes don’t feel a sense of ownership in those spaces, and that was a radical kind of shift, where audiences in big numbers came to events, workshops and exhibitions and felt a sense of ownership within the spaces inside and outside the museum.”

Alissar recalls one Wattan scheme designed with TV presenter Patrick Abboud, where young people, hotted-up cars and audio stories displayed for a whole weekend. She also worked across an oral histories outline and a landmark national forum in 2001 that focused on the representation and documentation of the heritage of Arabic-speaking Australians.

“We were controversial because taking up space and having our images and stories within state-owned cultural institutions; there’s sometimes a control of the narrative coming from outside,” she says. “I’m not being conspiratorial (but) I saw the reality of what censorship can mean.”

When a major Wattan exhibition in 2003 was indeed censored, Alissar reflected on a phrase penned by Edward Said who, incidentally, died the same year. “As if we can have the permission to narrate. As if we can have that right taken from us.” As a community artist, she was trying to bring critical dialogue into the public spaces inside and outside the Museum but found herself “in a tricky situation.”

“I kept working at least six years with the department I was working with and the partners we had built. (But) every six months, every year, there’d be a different kind of program until state and government funding was completely cut back. Whether it was political decisions, I don’t know.”

Wattan culminated in January 2005 with the Powerhouse Museum’s Beirut to Baghdad exhibition in the Australian Communities gallery. There is now a visual archive of Alissar’s work in the Museum.

“All those programs were about effectively working on transferring genuine community and cultural engagement and active community partnership within a state, cultural institution and for us to benefit from and use those resources to create high-quality work,” she says.

“That was a very significant period. So, it doesn’t matter whether I work on small, intimate things or they lead to bigger things. It’s always about creating a space for that critical dialogue and that change.”

To this day, Alissar keeps a notebook and writes things down on paper, a tendency to keep things as evidence or memory. So documentation was a goal for her when the two of us, alongside performance artist Maissa Alameddine, established Arab Theatre Studio. The Studio is an active programmer of events and performances in Western Sydney, developing theatre work and encouraging and supporting other disciplines, including poetry, visual art, and music. Arab Theatre Studio aims to have critical conversations and creative spaces for Arab-Australian artists to network, collaborate and produce contemporary work.

With Arab Theatre Studio’s growth, Alissar’s documentation has become critical. “Maybe holding and saving things is a part of documenting an unpredictable path and life. I have a lot of paper, and I have things on audio cassettes. I have things on VHS, I have things on discs we can’t even read anymore. So why do I keep them? I can’t throw them out,” she says.

“By the late 90s and early 2000s, I started seeing value in documenting. I focused on holding onto any kind of ephemeral material that came out of Arab-Australian contemporary work.

Alissar’s affinity for transience harkens back to her community theatre origins.

“(Theatre) is not like when you write a book; you have a book. The very nature of theatre is this alchemy, this combination of live presence—the voice, the body, the breath, the lighting, space, the audience relationship. It cannot ever be documented as in a real sense,” she says.

“I’ve always been on the edge; I’ve never been part of mainstream Arab cultural community work. I’m drawn to organic storytelling. However, I want to keep things. I want to hold onto something. That’s a bit of a beautiful contradiction I have.”

The interview with Alissar Chidiac and the writing of this profile was conducted on the unceded lands of the Burramattagal of the Dharug Nation.

First published in Aussie Theatre on 15 October, 2021. Article commissioned by Diversity Arts Australia for the Pacesetters Creative Archives project, which was funded through Create NSW. 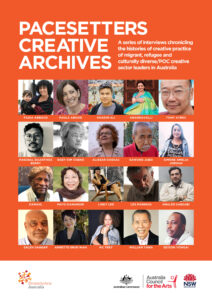 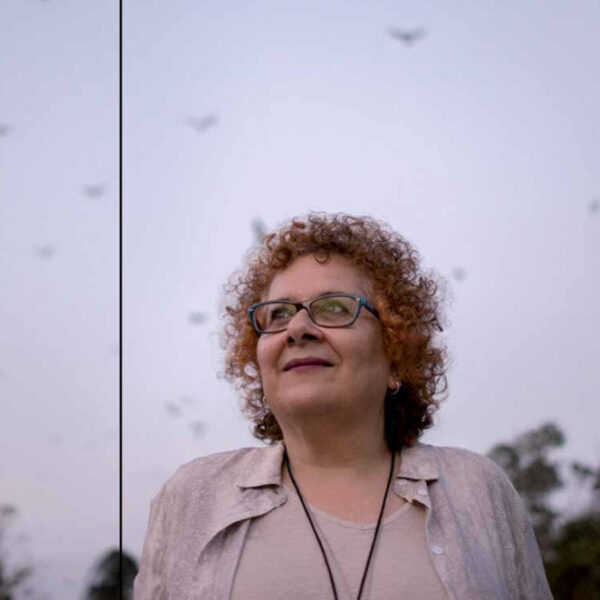 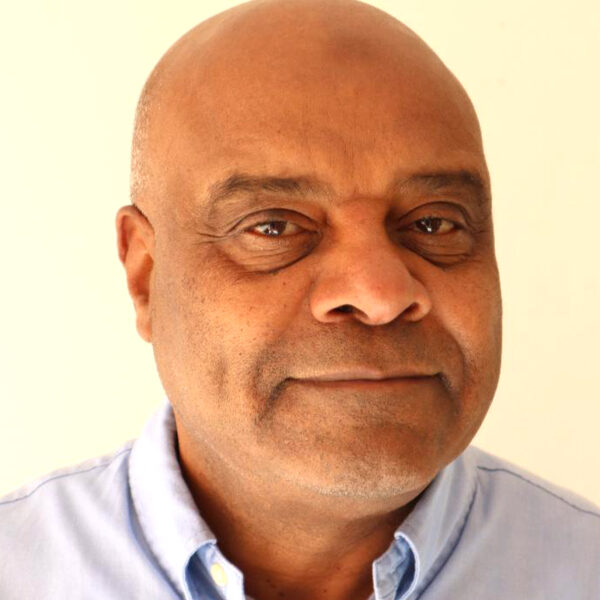