The Fair Play project, funded by Creative Victoria, is an equity and inclusion capacity building program for organisations that receive multi-year funding through Creative Victoria. The program seeks to address barriers to participation by underrepresented groups in Victoria’s creative industries, with a focus on developing organisation’s skills and capacity in working with three groups:

Congratulations to the 10 organisations who will participate in year 2 of our Fair Play program! Announced by Minister for Creative Industries – Martin Foley. They are:

Congratulations to the 10 organisations who will participate in year 1 of our Fair Play program! Announced by Creative Victoria’s Jane Crawley during her talk at the launch of the Shifting The Balance Report last month, they are:

The Fair Play team has been greatly helped by our intern Gabriela Arenas to develop a comprehensive ‘menu’ of organisations and individuals in Victoria who can offer specialised training in equity and inclusion for the creative industries. Presented by Diversity Arts Australia, with support from the Wheeler Centre

What’s the responsibility of creative organisations to act on equity and inclusion? What does it mean to have diversity programs led by people with lived experience?

These are just some of the questions that were addressed by people at Fair Play: Rewind event, featuring presentations and conversations between leaders of the Fair Play program.

Miss the event? Watch in Full Below.

Did you miss the live premiere of FAIR PLAY REWIND? Never fear – you can watch the full event below!

The masterclass, “How to diversify your leadership in the creative sector?” led by Dr Paula Abood and joined by Veronica Pardo (CEO, Multicultural Arts Victoria), addressed how organisations can diversify their own organisational cultures and activate change. The masterclass had 36 participants in attendance, including 2 mentors, and representatives from 8 program participants, as well as other creative industry organisations. It was fully booked, and participants shared the following afterwards:

“The exercise at the end provided food for thought and gave me some ideas which may be helpful. Having attended will help me to be more mindful when planning for our organisation.”

“I found the ideas and discussions very inspiring and revolutionary”

“I enjoyed the workshop and thinking about bigger picture issues around diversity and leadership in my organisation.”

The Fair Play Program is a two-year program that aims to make transformative change in Victorian creative industries at the individual, institutional and structural levels to increase equity and inclusion for diverse artists.

The program takes a human-rights-based approach and focuses on practices, policies and procedures that contribute to the culture of organisations. A key goal of the program is to address the root causes that lead to inequities and exclusion, and to empower individuals and organisations with the knowledge, resources and support to advance equity and inclusion.

Launching on 26 and 27 February 2019 with the Fair Play Symposium at the Wheeler Centre in Melbourne.

Twenty organisations who receive funding from Creative Victoria have been selected for inclusion in the free program. Eligible organisations include:

Read more about the Symposium here.

Selected organisations undertake a fully supported audit to investigate opportunities for change in leadership, creative programming, staff, marketing and audience development. Based on the results of the audit and the aims and objectives of the organisation, participant organisations are matched with relevant mentors, who are professional experts from the First Nations, Disability and CALD communities, to support the process towards transformative and sustainable change.

Mentoring includes targeted training, support to develop equity and diversity plans, knowledge-sharing and resource development. DARTS also supports the development of a community of practice to facilitate sector-wide discussion and engagement. This includes a number of symposia and forums, development of resources, tools, templates and checklists, and extensive digital content and resources.

Applications for 2020 training are now closed. 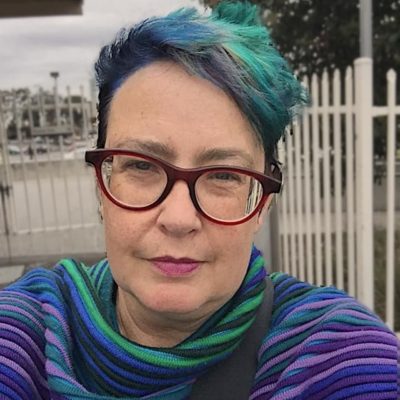 Hoa Pham is the author of six books and two plays. Her most recent novel, Wave, was published in 2015. The Other Shore won the Viva La Novella Prize in 2014. Hoa’s most recent piece is The Lady of the Realm, in the Review of Australian Fiction. Her play “Silence” was on the VCE Drama list in 2010. She is also the founder of Peril Magazine, an Asian-Australian online arts and culture magazine. She has completed her doctorate in creative arts and also holds master’s degrees in creative writing and psychology.

Kochava Lilit (zey/zir) is a queer disabled activist and writer who absolutely loves being autistic, ADHD, and Jewish. Zey volunteers with the trans collective Ygender, has performed with the queer disability collective Quippings, and is interested in neurodivergent culture, diaspora, access intimacy, and anger as a form of optimism. You can find zir online as @QueerJewishCrip and at activistbookshelf.com.

How long does the program take?

It is estimated that the mentorship and action plan phase of the program will take between six and nine months, however, there is participation in the broader project (including public talks and events).

How much does the program cost?

The program is free to selected participants.

Who can participate in the program?

Representatives of organisations that receive multi-year funding through Creative Victoria. Depending on the size or your organisation, the number of participants will vary but the maximum number per organisation is 20.

How many organisations will participate?

Diversity Arts Australia, in consultation with its partners, selected 10 participating organisations for 2019, and 10 participants for 2020.

How do I apply?

Want to see photos of the Fair Play Symposium?

Applications for 2020 training are now closed

Watch presentations and discussions on equity in the creative sector

How does you organisation stand on issues of equity and inclusion?

Keep up with the debate on arts diversity and access creative opportunities.